Have you been having spikes and dropouts in your heart rate monitoring? Especially with chest straps, such as Orange Theory and Polar H7 or other devices.

The way the belt works is that it receives electrical signals from the heart that are then shown as Beats Per Minute. However, without some kind of moisture (such as saliva, water, or a conductive gel) to act as a conductor between the heart and the belt, the signal will not be strong or consistent. We believed this is what causes erratic data, so we threw our lab coats on and decided to run an experiment.

Dropouts, which often are represented by “Flat Line” readings on the chart, are very typically low battery level or lost connection issues. An interesting note however; with certain devices such as the Polar H7 which have dual mode operation, the same heart rate monitor can read just fine on gym equipment while struggling to keep connection with the app. This is because the channel the H7 communicates with the gym equipment requires less battery power, so a low battery can be enough to power that channel (5.8 GHz) than BLE. Check out this great article on changing your Polar H7 battery.

Note: The Fitdigits app does not manipulate the data it receives from a heart rate monitor at all.

The Experiment: We decided to go out for a run using two devices, the Fitdigits app as well as a Polar watch. We connected both with the Polar H7. The interesting thing about this experiment is that the phone and the watch use two different platforms. The iPhone uses Bluetooth Smart to connect with the H7, while the watch uses a 5.8 kHz signal to pair. This enables us to be comfortable concluding that if both devices spike, it is because of the belt and not because of an issue with the app, or a specific platform (such as Bluetooth Smart). So basically we went out for a run with both devices, and whenever we saw a spike in the Fitdigits app, we compared those results with the Polar watch.

The Results:The run started with a bang, spiking right off the bat and soaring to unforeseen heights all the way out of zone 5! The watch mirrored the results. When the heart chart on Fitdigits showed our BPM going above zone 5, the watch showed exactly the same results, with no discernible difference.

Conclusion We conclude that the spikes are a result of conductivity issues and / or hardware issues, not the app itself. Any time you get a spike or dropout, it is either the result of your body not having enough moisture to get a firm connection with the belt, or, in more rare cases, the hardware going bad, many times the belt, but less frequently the HRM “peanut” (brain) – the part that clips into the belt, goes bad.

We also believe messing with heart rate numbers received from a device is not a good policy, even if it is due to these malfunctions. 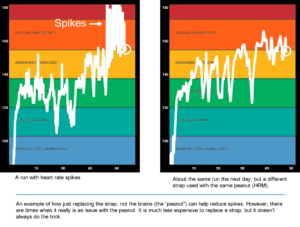 If you get spikes at the beginning of your activity, typically that points to a connection issue between the strap and your body, since you haven’t yet really begun to sweat. We strongly suggest wetting the strap with either water, saliva, or a conductive gel. Fitdigits has a great blog post on Troubleshooting Your Polar H7, and noted fitness blogger DC Rainmaker also has a great post on How to Fix Heart Rate Strap Dropouts/Spikes.

If you are mostly walking / running / biking, you might consider getting and Optical HRM (like the Scosche Rhythm+ or a Mio HRM) instead of the Polar (or any chest strap). Typically, not being electrical per se, they have less of these issues.