Ready for some Power? We are! Cranking up the Watts just makes you feel, well, powerful. And according to science, there is no more accurate version of calories burned than Kilojoules, something you can only get accurately by measuring watts. For cycling, it is the rage, and for good reason. If you are interested in learning more on the history and the power revolution, listen to this great podcast with Hunter Allen at VeloNews.

So let’s jump right into the nitty-gritty. The requirements are pretty basic – a compatible BLE Power Meter, an iOS compatible device with one of our apps installed and a Star Membership.

Tap OK to pair with the sensor.

Note: If there are multiple sensors found, like if you are in a Spin(r) class, you will also see a proximity meter next to the sensors. Typically the most powerful signal is the one closest to you. Tap that sensor to pair.

Running a Workout with Power

Once your sensors are paired, simply hit the play/go button on the activity type you’re using the sensor on, or chose any number of ways you can start your workout / workout routines. It will acquire the sensor as you activate it, and begin the workout. If you want different data then what is shown on the default dashboard, you can easily setup custom dashboards, even one just dedicated to Power metrics. You also can swipe to a Power (Watts) graph, with Power Zones if you have set them up or done a Personal Power Assessment. 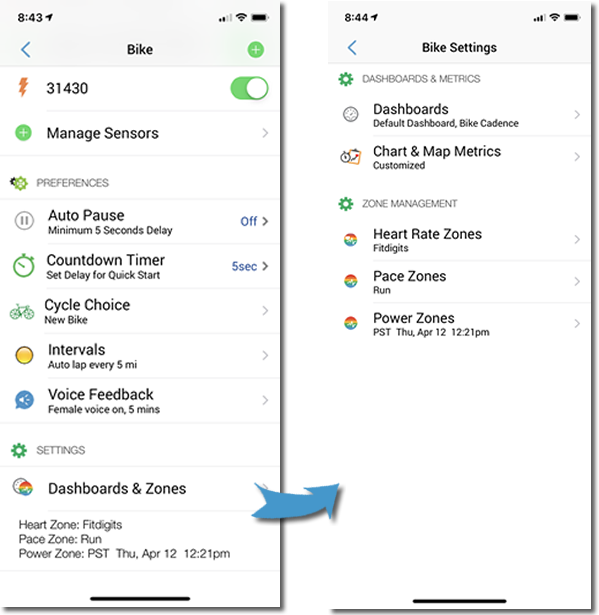 Setting up Power Zones is easy, and allows you to start designing workouts specifically targeting different systems and improvements. You typically want to personalize your zone set (see more on the Personal Power Test (PPT) below) to customize your zones to your current fitness level (we are not fans of default zones here!! We are all individuals and very different, and we respect that!). If you are familiar with customizing and managing heart rate zones, it’s the same process.

Select your activity type for the Zones, tap the Gear / Activity Options icon.

Tap the title to change it, change the values on the right to modify them, tap the zone name to change those if you want.

Tap Save to save the set. That will bring you back to the Zone Set list. Tap again into the details and tap Set Default at the top if you want to use that zone set as your default.

To delete a zone set, in the Zone Set listing, tap edit, then tap the red delete icon on the left.

Training at various intensities gives specific physiological adaptations. The most accurate way to categorize intensity ranges is by measuring the work-rates that cause various physiological responses. Power Zones are based on a percentage of a rider’s baseline fitness marker, known as Personal Power Threshold (PPT). PPT represents the rider’s ‘work-threshold’ or their current level of fitness. With power meter technology of the Spinner® Chrono or the Crank, the result of a relatively simple and straightforward test can accurately establish your PPT. Once determined, riders can train in their unique ranges based on a percentage of their PPT. Since power is dynamic and improvement in fitness will increase PPT, it is important to retest quarterly (or sooner) to track progress and re-establish zones that match the rider’s current fitness level.

The Personal Power Threshold Test (PPT Test) is a sub-maximal, repeatable test to determine PPT. It is:
• The personal results of an individual rider
• A scientifically validated incremental test
• Easy to learn
• Repeatable and Reliable
• Sub-maximal, and so can be performed by nearly everyone

After a 10 minute warm up (you can skip this by double tapping on the screen at any time), the test consists of back-to-back two-minute stages, in which the rider sustains a cadence goal within 5RPM of the target, while remaining a seated position, in Hand Position two. The first stage begins with light resistance on the flywheel. Each corresponding stage begins by increasing resistance, while keeping cadence and riding position the same.

The added resistance should be enough to feel the change, as if increasing RPE (Real Perceived Exertion) to the next level. This also noted as increased wattage. Since individuality and fitness level will determine the actual wattage change, it will generally be around 5–20 watts. Adding too much resistance will bring the rider to threshold too soon. Adding too little resistance will extend the overall duration of the PPT Test. Generally speaking, a rider should aim to complete 5-8 2 minute ramps to completion.

The graded ramp process continues until the rider can no longer sustain the workload for an entire two-minute stage. This will be noted by an obvious decline in the ability to sustain steady pedaling, cadence and riding position. The rider’s PPT is the workload sustained during the last fully completed stage.

Below are the guidelines for implementing the PPT Test. This assumes you have your power meter already paired (see above).