My Fitdigits – Online Desktop Browser
1. Login to my.fitdigits.com with your Fitdigits username and password.
2. Tap Menu > Partners > Fitbit > Link Account.
3. Enter your Fitbit login/email and password if prompted (if you are already logged in jump to #4) and Login
4. Tap Allow

In Apps
1. Tap Menu > Partners
2. Tap Fitbit
3. Tap Link Account
4. Enter your Fitbit login/email and password if prompted (if you are already logged in jump to #4) and Login
5. Tap Allow
6. Tap Done, then the Back arrow (top left)
7. If you ever need it, Unlink is now in the upper right of this screen 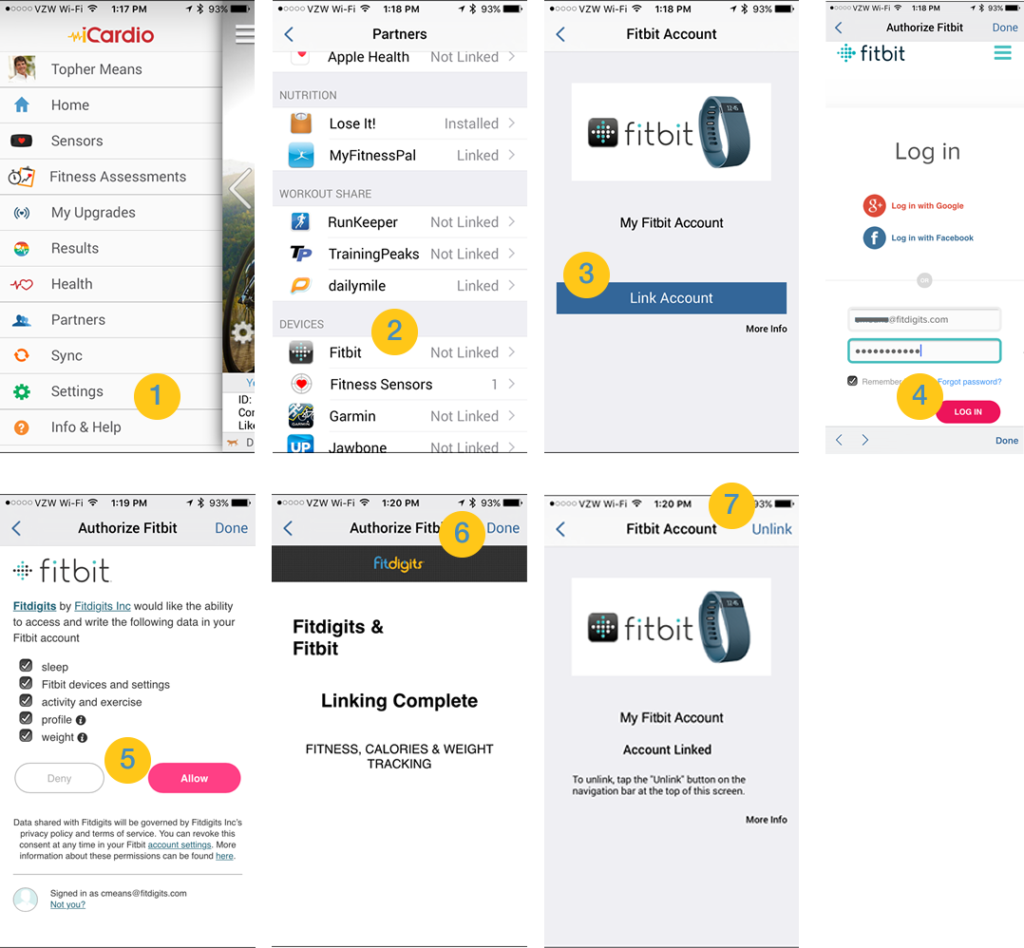 If you have more than one partner linked, you also need specify which one is your preferred Daily Activity data provider.

Remember, Fitdigits calories trump Fitbit calories so while you are earning steps during all Fitdigits workouts, your calories burned with Fitdigits will override estimated calories by Fitbit for that exercise. To view your Fitbit and Fitdigits steps and calories graphed over time in the app, go to Menu > Daily Activity.

You may want to unlink and re-link, however I would like to point out that we attach to the account at Fitbit, not the actual device itself. So, if you are using the same exact Fitbit account, the data should be flowing in regardless of device.

No Data There at All (and Never has Been)

1. One error you might see is “Insufficient permissions given to retrieve Fitbit data, please re-link your Fitbit account.” If you get that error, it means on the original linking, not enough of the permissions were allowed in order for us to access the profile and/or data.

The solution here is to remove the link from Fitbit side as well as ours. On Fitbit that information is here: Fitbit.com/user/profile/apps

On the Fitdigits side, unlink using the procedures outlined above. Do an unlink / relink, but with all permissions enabled, it should update the data. Please give it a few minutes after re-linking to get all the data from Fitbit.

2. If you don’t see the error on permissions, and are not getting data, it may be an account issue, either on the linking level or a different account connected.

The first thing to do is confirm what email/account your current Fitbit is syncing to – you can find that on http://www.fitbit.com – login with your Fitbit credentials, confirm you can see the steps there, then click on the gear at the right and go to Settings. You can see the email in the upper left and Profile section.

Data was Coming Through, but Not Recently

Often this is a timing issue. If you wait a couple minutes, then hit refresh, that might be all it takes.

However, if you have confirmed that it is the exact same account / email at Fitbit you were using (see above) – can you confirm the data has gone from your device to the Fitbit.com servers? The flow of data is “Device (> sync to >) Fitbit app (> sync to >) Fitbit.com (> sync to > Be Colorado. It has to show up first on Fitbit.com (not the app only), then, with a little delay but not too much, show up on Fitdigits. Note that Fitdigits, per the terms with Fitbit, only updates steps / checks for updates in any given day twice in the current day, then trues up the number if necessary the following day(s).

In other words, steps have to get to Fitbit.com in order to show on the Be Colorado dashboard, and we have heard of some instances where Fitbit servers are not getting the data even though it looks like the person has synced successfully. To check and make sure Fitbit.com has the data:

You definitely want to make sure nothing has changed – no new devices recently, new email, anything like that. If so, an unlink and re-link might clear things up as long as data is showing in the Fitbit.com site.

We did run into an issue with a new Fitbit the other day and had to have a Fitbit support rep tell us how to logout / log back into the Fitbit app and re-assign the account to a new device in order to get it to sync the data from the new device from the app to the cloud.

Is There a Recommended Type of Fitbit?

There is no recommended type of fitbit per-se. It really depends on how interested in actual tracking and getting involved with Fitbit you are, what your budget is, and other factors. Here are some good links to places that can help you make a decision – the low end is the Fitbit Zip, but it doesn’t track sleep, floors or elevation – but does track enough to qualify you for the Be Colorado. Move. incentive.

They are all compatible with Move program and it doesn’t matter which one you use.

If you are still having trouble, please contact Fitdigits support.