Testimonial by Al B, cyclist.

Ah yes, it is a marriage made in technology heaven! Here I am a graphic designer with Macs as my central nervous system and the iPhone as my right hand gadget. Therefore, being a bicycle and fitness enthusiast, it all comes together using the Fitdigits Cycling Bundle.

Heart Rate Monitor – Most Valuable Training Tool
I regard the heart rate monitor as the most valuable training tool. I alternate between a road bike and a mountain bike from day to day. I like to see the differences in the metrics of my body’s effort between the two different bikes. 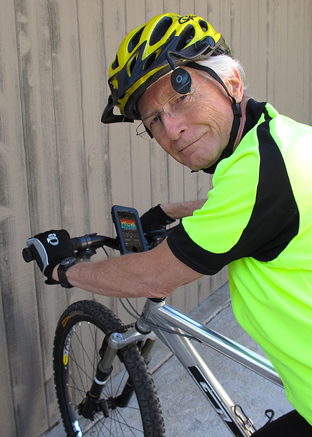 Fitdigits and the iPhone
I’ve owned and used other fitness monitors, but Fitdigits gives me all the conveniences of the iPhone AND all the data I could ever wish for while bicycling…cardio, speed, cadence, elevation, averages, my music, seeing where I’ve been on a Google map, and much more. The graphical interface on the screen is well laid out and manageable. On top of that, I like that I can email this data back to my computer.

My Data
I can view either the graph superimposed on my heart rate zones screen, or observe the actual HR number, or when my eyes are glued to the road, hear the voice prompts when entering or leaving a zone.

Motivation
Fitdigits beckons me everyday to get on my bike, get out there and explore my capabilities with certainty. My big favorite is that it guides me to stay in my proper heart rate zone. Riding in my “performance zone,” allows me to improve in strength and endurance. In addition, Fitdigits offers just the right incentive to keep me going and it’s that consistency of exercise that is the real payoff.

Performance
Fitdigits helps me observe and measure my growth. I can assess all data as a total picture of my performance after a ride. I can compare from one day to the next my two most vital stats: the DURATION I’m in my HR target zone and my average MPH.

Over time, viewing the data each day on each bike, Fitdigits teaches me how my body will react with these bikes… or what I can expect riding them. It helps me translate my effort on each bike through evaluating real quantitative results. And, it’s just plain fun. It’s like looking at all the gauges of your race car’s engine. In other words, Fitdigits has helped improve my performance IQ…I’m smarter about my riding and avoid over training.

Endurance and Fitness Level
Lastly, I can track my recovery rate by how quickly my BPM drops in a minute after a ride. The more it drops in that minute, the better condition I’m in. That’s a real gauge of heart fitness.

In life, if we are not being smart about having fun, we are doing something wrong. Fitdigits is smart. Fitdigits is fun. Fitdigits is right. Take it from me, a seventy-five year old cyclist with a lot of miles in the saddle… and, now a lot of data to play with.

After working at Fitdigits for a couple months, I ran a half-marathon this past Sunday, June 5th, 2011. The Ojai 2 Ocean, though it started and ended at the Ventura Pier in Ventura, California, which means it was a hometown run for me. I’ve been running for many years now, so it wasn’t a first, but it was certainly a beautiful and fun one. After passing my 30s my marathons have become fewer and my half-marathons much more fun! My goal this time was a 2 hour 10 minute run, on the low end, 2 hours.

In the interest of testing, I brought my iPhone and my latest version of Fitdigits with me, as well as my Garmin 305, thinking I’d compare results. Of course, as does happen occasionally, I got to the starting line and turned on the Garmin only to find out it was already on reserve battery power (I had only used it for one small run after charging it last! I think maybe it got turned on while in my gym bag by accident). Thank god for backup, especially backup that included my tunes!

It was a beautiful morning, and the race started promptly at 6am. It was great having my iRunner going – I was able to pay close attention to my heart rate, and make sure I didn’t make the mistake I’ve made so many times before – going out waayyy to fast. I tried to keep my pace down to zone 3, my endurance zone, for at least the first 8 miles. I wanted to make sure there was gas in the tank at the end. I was glad I did – it was fairly often, caught up in the vibe of the run, that my heart started pounding harder, even though my perceived effort was still just having fun and moving along. I knew to cut it back. 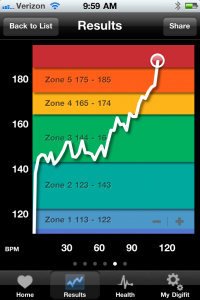 By mile 8 I was ready to “push the engine” a little more, though I knew I still had a ways to go. I picked up the pace to zone 4, allowed myself to cross the line. From there, I tried to hold it steady for the next couple miles, until at least mile 10 or 11, when it was time to crank up the afterburners (well, ok, time to push myself – not exactly a jet engine these days, but it sure felt like my legs were on fire).

When all was said and done, I had just crossed into the “over max effort” zone as I crossed the finish line in 1:56, crushing (yes, I do believe 4 minutes better than your goal time is crushing 😉 my goal). I knew I had given it all I had, maximum overdrive. Whether it was the best run race or not, I can’t say; I’m not a trainer, just an old(er) runner, but it felt good and just being out there keeps me young. The effort was all mine, with a special shout-out to the wife, who of course I couldn’t do it without her support, but Fitdigits was certainly a key companion and partner throughout – and it let me rock out along the way too!

When all is said and done, any day they hang a ribbon and medallion around your neck is a good day. Any day you finish a hard workout by 8am AND get a medal, that’s a great day!